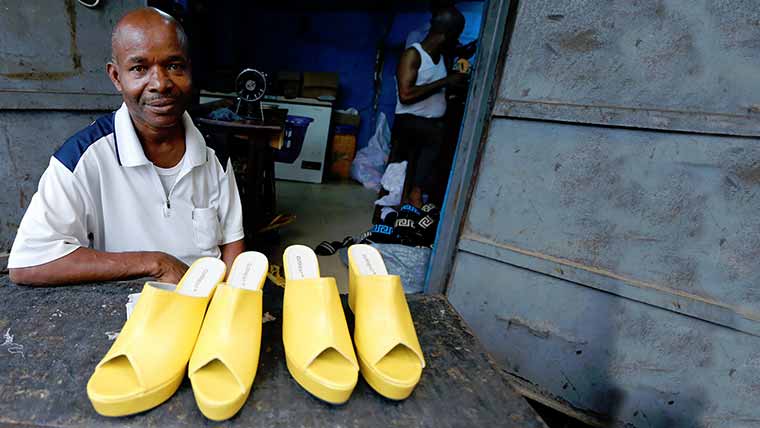 de-risking is a humanist issue

For nearly two decades, the world banks have been withdrawing banking relationships with countries which they regard as high-risk.

Let me be clear that I'm not condemning the global banks for closing their correspondent banking relationships with high-risk regions. No one could question that many poor-quality or genuinely pernicious transactions originate in these areas. And if one instance of money-laundering or terrorism funding slips through, the fines can be punishing. In the last decade, $26 billion in fines has been levied for non-compliance with AML/ATF, KYC or sanctions regulations¹. With business-damaging fines at stake, and potential KYC costs exceeding the margin on a transaction, it's nothing but sound business to withdraw from a jurisdiction.

But understanding the rationale doesn't lessen the problem. Take a shoemaker in Nigeria. He's a small businessman who can make quality shoes at highly competitive prices. Even paying and treating his staff to fair trade standards, his overheads are comparatively tiny. There's a strong appetite for his goods in the established world, so we have a supply and a demand; surely there's a deal to be done.

As anyone involved with world payments will know, it's not that simple. Let's imagine a European retail chain that wants to buy the shoes. The retailer wants to pay in Euros, which will be converted to Naira for payment at destination. But that exchange requires correspondent banks to facilitate it, and correspondent banking has been withdrawn from Nigeria.

Africa embodies 75% of the world’s poorest countries². Foreign aid organisations do admirable work, but the core problems will never be resolved until the victim countries are given the opportunity to earn the money they need in order to become self-supporting. In June 2016, the International Monetary Fund called for coordinated efforts by the public and private sectors to mitigate the risk of financial exclusion and the potential negative impact on financial stability³.

While companies struggle in de-risked jurisdictions, the story continues at personal level. Africans working in Britain send over £4bn per year home to their families. This stream is a significant boost for the economies of some of the world's most deprived countries. But money transfer companies typically charge 8-9% on the exchange, in addition to conversion costs. Something in excess of £400 million of live-saving funds fails to reach its target every year. The late Kofi Annan called for in-depth investigation into certain companies' money transfer activities, and called for urgent reform in the industry.

Ironically, the effect of the global banks' de-risking has significantly increased risk for SMEs operating in the financially isolated regions. Denied access to world trade, they are forced to turn to "shadow banking". These unregulated channels are open to money laundering, terrorism funding and other threats. The very initiatives intended to prevent criminality actually create opportunities for predators to further their aims. As a result, jurisdictions regarded as high-risk become still higher-risk. It's a feedback loop that traps entire countries in inescapable poverty.

The idealism is undeniable, but is it good business? I find the chart on the left revealing and fascinating. It ranks the reasons banks gave for rejecting applications in 2016, ordered from most significant to least. A quick scan down shows that all of the high scorers are based on factors around the transaction, not the viability of the transaction itself. And right there at the top is the Know-Your Customer requirement. The proposals are being declined, not because they're non-viable, but simply because no one knows if they are. Until we take a fresh look at KYC, we can never know the potential business we're turning away. That means that excluded countries will continue to flounder. Do we have the right to accept this as the status quo?

It's tempting to read from the chart that established world finance is missing 90% of the opportunities out there, but that would be a naive conclusion; the truth is that we just don't know, because we're not trying hard enough to find out. But until we start checking for babies in the used bath water, nothing will change.