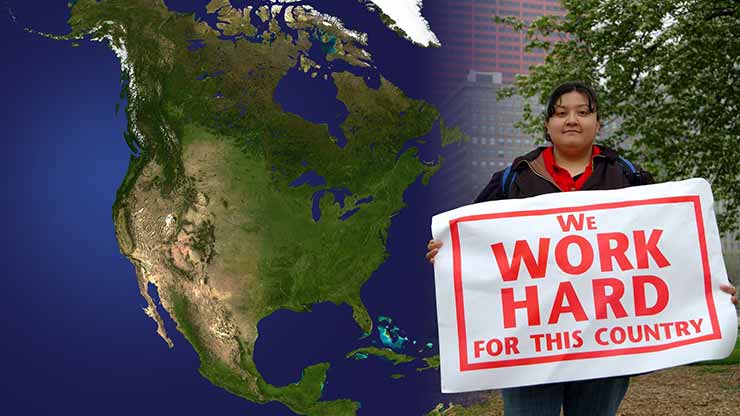 DESPITE INVESTMENT AND POWERFUL INTERVENTION, THE MEXICO/USA WALL MAY ALREADY EXIST

Relations between Mexico and the USA have rarely been at a lower ebb. The present administration has galvanised feelings against Mexicans working in the US, even though they rank only third in immigrant numbers, behind China and India.

Mexican workers, of whom there are around 12 million working legally in North America, pay billions in tax into the US treasury and typically take jobs that would otherwise be difficult to fill. In direct contradiction of populist attitudes, migrant workers from Mexico are a strongly positive force in the US economy.

A large proportion of migrant workers go to the states to be able to support their families at home. The money they send is a vital factor in reducing poverty and Mexico to become more prosperous and take up a role on the world commercial stage.

There've been heavyweight interventions on Mexico's behalf. The Bill and Melinda Gates Foundation supported a 13.5 million USD initiative between 2008 and 2013 to develop digital payments. Impressive results were achieved, but the hoped-for improvements in financial inclusion failed to materialise.

Despite the great strides in accountability and security that resulted from the initiative, correspondent banks declined to re-open services. The current standards regarding compliance mean that it's virtually impossible for Mexico to achieve global approval. In a largely rural, cash-based economy, certain unusual but practical measures had to be imposed; one such was that rural recipients must withdraw all of their benefit as cash within a specified time period. The rationale behind this isn't important here; what is significant is that it effectively brought any KYC audit trail to a dead stop. Paradoxically, Mexico would have more chance of compliance approval if it made its payment systems less transparent and reliable.

But, even if these problems could be addressed, Mexico still has a long road to travel to adhere to current compliance standards. Its infrastructure remains under-developed, and political and security concerns remain. Advanced electronic payment innovations such as biometrics are impractical because the country's connectivity is profoundly inadequate for the purpose. Progress continues to be made, but it's inevitable that these issues will remain unresolved for many years.

But what can be done right now? 42% of Mexico's population lives below the national poverty line¹ Those that migrate to other countries are reported to send over 24 billion USD home each year², but this is almost certainly an incomplete figure. It covers only those transfers made through formal channels. The withdrawal of correspondent banking has meant these payments have become increasingly difficult, inevitably driving payments underground, where workers who just want to support their families are exposed to crime, corruption and even personal risk.

It's a pattern we see repeated with disappointing regularity. World compliance standards are based almost entirely on region, not on an evaluation of the active parties to a transaction. Far from eliminating unsound financial practices, these standards are simply a choice not to get involved.

At least in Mexico's case, there have been some signs of progress. A number of banks have set up a network of agents in retail chains, giving local populations at least some access to banking. While not a complete solution, this should at least improve matters somewhat for transfers between individuals, but the bigger picture of small and medium companies who hope to trade abroad remains largely unaddressed. If we're going to re-connect countries like Mexico, we have to shift focus from the jurisdiction to the individuals and organisations that are actually involved in a transaction. That's not an easy task, but it's an essential one if we're to protect vulnerable populations and help them towards self-sufficiency.

It's to be hoped that the physical wall will never be built. But right now it's time to break down the financial wall that already exists.